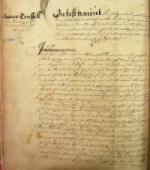 The Clothworkers’ Company had two separate holdings at Lovell’s Inn, Paternoster Row. The holdings came from two separate benefactors. The first, James Trussell (d. c.1637), Citizen and Clothworker, bequeathed money for the purchase of property to The Clothworkers’ Company in 1635.[1] The corresponding property comprised a number of houses in Lovell’s Court. Trussell instructed the Company to make numerous charitable payments from the income generated by these properties. These included monies to Christ’s Hospital and to the poor of the parish of St. Bride.[2]

The second benefactor was Philip Christian (d.c.1654), Citizen and Clothworker, who bequeathed two tenements at Lovell’s Inn to The Clothworkers’ Company. Christian attached a number of conditions to his bequest. In the first instance, the Company would only receive the property on the death of his wife, Rebecca. He stipulated that the Company should pay £10 a year to two boys from the Isle of Man to support their apprenticeships in London.[3] He also instructed the Company that if there was not a free school in the town of Peel on the Isle of Man that the £20 for apprenticeships would cease, and be granted instead towards the establishment and maintenance of a school on the island.[4] The £20 would be divided as £18 to the schoolmaster and 40s. for providing books, ink and paper to the scholars. The Company were also requested to give seven pounds to seven poor men and women from the Company each year. For fulfilling his will, Christian granted the Master and four Wardens of the Company 10s. each; the Clerk 8d. and the Beadle 3s. and 4d.[5]

The first reference to the Paternoster Row properties in the Court Orders came in 1663, when concern arose over the Company’s title to the land.[6] These concerns centred on the remarriage of Christian’s widow to Mr. Parker, who brought a suit against the Company for their interest in the said houses. Fearing the potential loss of the properties, which they were to receive on the death of Rebecca Parker (formerly Christian), the Company appointed their tenant, Mr. Fowlkes to follow the case and maintain the Company’s interest in the same.[7] The properties, along with those of Trussell, however, perished in the Great Fire of London in 1666. Paternoster Row was in the direct path of the Fire, which ravaged the entire parish of St. Faith under Paul.

In the aftermath of the Fire, in December 1688, the Company reappointed feoffees for Trussell’s properties at Lovell’s Inn.[8]  On the same day, Edward Trussell, the son of James, ‘promised to settle so much land or houses upon the company as they enjoyed in Paternoster Row for the payment of £20 a year, which James Trussell, his father left to the Company for charitable uses’.[9]  In 1669, Mr. Parker, the husband of Christian’s widow, came to the Court to ask the Company to either buy her life’s interest in the tenements at Paternoster Row or to allow her to grant a lease of the properties, so that they might be rebuilt after the Fire.[10] The Company agreed to consider the request, and asked to undertake a survey of the property before they would make their decision. By November 1669, the Company had reached an agreement with the Parkers that they would surrender their interest in the land, and the Company would manage the property.[11] The Parkers would in turn receive the ground rents.

By 1670, Christian’s wife was dead.  The Court Orders suggest that in the aftermath of her death, the Company entered a dispute with her new husband Mr. Parker for the properties. The Court Orders record how the Company ordered that the money paid out and disbursed by the Company in the ensuing suit with Mr. Parker, ‘be first paid and satisfied out of the annual rent, which shall be received for the said ground before the said uses be performed by the Company’.[12] The suit appears to have been settled quickly, and a new lease of the property was granted to Mr. Beckford in June 1670.[13] Like many of the post-fire leases, Beckford’s lease was for a particularly long duration of seventy-one years. He agreed to pay an annual rent of £15, to pay £5 to Mr. Parker and to rebuild the property on the land and pay all taxes associated with it.

In April 1672, the Company were in dispute with Edward Trussell over the payment of £20 of rents due to the Company for the ground in Paternoster Row, granted by his father.[14]  This money was that directed by Trussell’s father to be paid to charitable uses.  They directed Trussell to pay or to face a lease of ejectment.  In May 1672, the Company ordered that if Trussell failed to pay they would eject him from the property. [15] By July 1673, the Company appointed Wardens to view ‘Trussell's lease to determine how to move against him’.[16] In August 1673, the Company issued a lease of ejectment against Trussell.[17] The dispute with Trussell proved to be even more long running, with the Company pursuing him for arrears of rent as late as 1677.[18] The properties granted by Trussell later became 1-4 and 8-10 Lovell’s Court. [19] The Company sold 1-4 Lovell’s Court in 1874 and 8-10 Lovell’s Court in 1884. Christian’s properties later comprised 9-12 Lovell’s Court, which were sold by the Company in 1950.[20]

[19] A. Buchanan, ‘The Sources of the Wealth of The Clothworkers’ Company’, unpublished paper.

[23] Ibid., f. 16. The final expenditure figure can only be estimated in this year due to damage to the original.