James Trussell (d. c.1637), Citizen and Clothworker, bequeathed money for the purchase of property to The Clothworkers’ Company in 1635. The corresponding property comprised a number of houses in Lovell’s Court (in the parish of St. Faith under St, Paul’s). Trussell was Quarter Warden of the Company from 1633 to 1634, during which time he is recorded participating in several Company activities such as viewings of property.[1] Trussell was born in the parish of St. Bride’s, London. He was married to Elizabeth, who outlived him, and had three children: two sons, Edward and John, and a daughter Elizabeth, who was married to a medical doctor, John Raven. He was the son of a Clothworker, Edward Trussell, and had two brothers, Thomas and Avery. It is probable that he lived in the parish of St. Faith’s in London, as it was here that he requested to be buried.

Trussell was made Free of the Company by patrimony in 1601.[2] In the Company's apprenticeship records, he is recorded as Master to ten apprentices. These included John Lillington in 1607; John Moore and Phillip Perryns in 1609; Samuel Lynge in 1615; James Keblewhite in 1617; John Davy in 1622; Thomas Langley in 1626; John Turner in 1632; Henry Street in 1633; and John Ireton in 1634.[3] Five subsequently took up their Freedom of the Company: John Moore, Free in 1616; James Keblewhite, Free in 1626; John Davy, Free in 1631; Thomas Langley, Free in 1634; and Henry Street, Free in 1640.[4] James’ sons Edward and John were made Free by patrimony in 1632 and 1633 respectively.[5] It appears that Trussell did maintain some strong connections to the Company's root craft. In his will, he granted co-ownership of his shop in an unidentified location to both of his sons.[6] This was presumably a base from which Trussell and his apprentices undertook their day-to-day trade. His wealth, however, suggests that he may also have been a merchant trading goods within the Cityand further afield. 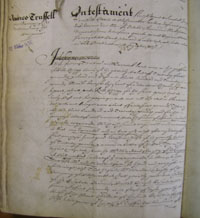 Trussell's wealth is evident in his surviving will, dated 10 October 1635, in particular regarding the bequests he made to his children. He granted his son, Edward, the princely sum of two thousand pounds, as well as a lease of a tenement in Ave Mary Lane (Ave Maria Lane). He also bequeathed to Edward other material possessions such as books, a seal ring and a gilt salt.[7] His son John was granted £1500, of which he already had already received £1000 in lieu of his marriage, and his father's  ‘greatest guilt standing bowle’.[8] His only daughter Jane received £1500, of which she already had £1000 towards her marriage settlement to John Raven. Trussell's executors were instructed to use the remaining £500 from her grant to purchase lands or houses in fee simple for Jane and her husband during their lifetimes[9]. Further monetary bequests were granted to his siblings, Thomas and Avery Trussell, while godchildren and friends also received gifts of money and gowns.[10]

Trussell's major bequest to The Clothworkers’ Company was property. He instructed his executors to proceed to sell property that he held in Warwick Lane to the current tenant, Robert Chippe, who had promised to pay £320 for the same.[11] The executors were to  make the sum up to £400, from both the sale and other remaining monies, and purchase houses of an annual value of twenty pounds to be bequeathed to The Clothworkers’ Company. In turn, the Company had to fulfil a number of conditions. From the rental income received, they were to pay five pounds to Christ’s Hospital each year to be used for the relief of the poor children there.[12]A further three pounds was to be paid to the poor of the parish of St. Faith, with twelve of the poorest inhabitants of the parish to receive five shillings each on the 5th November. Both the Clerk and Sexton of the parish were to receive two shillings and six pence, and similar sums were to be paid to the Clothworkers' Clerk and Beadle for their work in fulfilling Trussells' directions. He also instructed the Company to pay the Parson of the parish ten shillings to preach a sermon on the same day.[13]

Trussell also stipulated that the Company must pay three pounds to the poor of the parish of St. Bride’s from their rents. This money would be divided between twenty four poor Company men, and was to be paid on the day in March upon which Lady Packington’s sermon was preached. The Clerk and Beadle were to receive two shillings and six pence for their role in distributing the money.[14] A further ten shillings was granted to each of the Master and Wardens for overseeing the bequest. Trussell also instructed the Company to pay any remaining monies from the rents to poor members. 15] In a smaller separate bequest, he asked his executors to ensure that the Company received a silver bowl that his father, Edward, had given .[16]