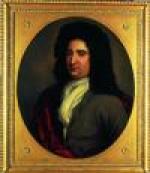 Philip Christian (d.c.1654), Citizen and Clothworker, bequeathed property in Lovell’s Inn in Paternoster Row, in the parish of St. Faith under St. Paul’s, London to The Clothworkers’ Company. He was the son of Daniel Christian, a yeoman from Hollonstown (possibly Holme Town)  on the Isle of Man.[1] He was elected to the Livery of The Clothworkers’ Company on 10 July 1639, and became Renter Warden and an Assistant on 17 August 1653.[2] He was married to Rebecca, who outlived him, and they did not have any children.  He had at least two sisters, Katherine Harrington and Mrs. Blackisten, who are referred to in his will.[3] He lived in Poultry, in the parish of St. Mildred Poultry, London. He made no specific requests regarding his burial place in his will, and it is presumed that he was buried in the parish in which he lived.

Christian’s apprenticeship was recorded in the apprenticeship registers of The Clothworkers’ Company on 3 July 1607.[4] He was apprenticed to John Garret, and was made Free by servitude in 1616.[5] Christian went on to become a Master in his own right, with one apprentice, Nathaniell Bessey, recorded in the registers in 1650.[6] Three freedom records acknowledge Christian as Master. These relate to Thomas Harman, Free in 1634; Thomas Birch, Free in 1642 and Alexander Wilke, Free in 1650.[7] Christian appears to have plied his trade in clothmaking, and began to specialise in crewel yarns, for embroidery. The apprenticeship record of Alexander Wilkes noted Christian’s occupation as a ‘cruellman’.[8] Christian was possibly involved in mercantile trade in this specific produce, from which he gained his wealth.

In his will, Christian made several bequests to family, friends and institutions.[9] He bequeathed a lease of his house in Poultry to his wife, Rebecca, with the proviso that should she died before its expiry, the rental income was to be given to the poor of the parish of St. Mildred.[10] He granted five pounds to both of his sisters and numerous cousins. Charles Kneckell, his cousin, received a bequest of ten pounds, to be paid on his completion of his apprenticeship.[11] He requested that five pounds of his, which was then in his cousin Captain Christian’s hands, should be given in the sums of twenty shillings over five years to the school in Peel on the Isle of Man to purchase books, paper and ink for distribution to the poorest students. He granted a further five pounds to the children of Christ’s Hospital for their education.[12]

By far the largest bequest made by Christian in his will was that of the two houses in Lovell’s Inn to The Clothworkers' Company.  A number of conditions were attached to this bequest. In the first instance, the Company would only receive the property on the death of his wife, Rebecca. Furthermore, Christian stipulated that the Company should pay ten pounds a year to two boys from the Isle of Man to support their apprenticeships in London.[13] He also instructed the Company that if there was not a free school in the town of Peel on the Isle of Man, then the twenty pounds for apprenticeships would cease, and be granted instead towards the establishment and maintenance of such a school on the island.[14] The twenty pounds would be divided as eighteen pounds to the schoolmaster and forty shillings for providing books, ink and paper to the scholars. The Company were also requested to give seven pounds to seven poor men and women from the Company each year. For fulfilling his will, Christian granted the Master and four Wardens of the Company ten shillings each; the Clerk eight pence and the Beadle three shillings and four pence.[15]

[1] 'Philip Christian, Apprenticeship, 1607', Records of London's Livery Companies, URL: http://www.londonroll.org/event/?company=clw&event_id=CLLL15850. Date accessed: 8 January 2013. Daniel Christian is recorded in the apprenticeship record of Philip, as his father. By 1607, when Philip began his apprenticeship is father was dead.

[2] D.E. Wickham, Unpublished biography of Philip Christian in the correspondence archive of The Clothworkers’ Company