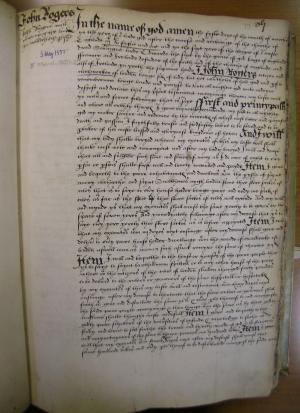 John Rogers (d.c.1555), Citizen and Clothworker, bequeathed property at Bucklersbury (in the parish of St. Mary le Bow) and in Walbrook (in the parish of St. Mary Woolchurch) to the Company in his will, dated 5 March 1551.[1] He directed the Company to use the rental incomes for the continued upkeep of the property, and to distribute the remaining money to the poor of the Company.[2] The property seems to have comprised one tenement. The Company’s holdings at Bucklersbury were expanded by the 1603 bequest of Edward Pilsworth, who granted them one messuage or tenement in Bucklersbury.[3] This tenement, like other properties granted by Pilsworth in Candlewick Street and Bartholomew Lane, were to become part of the Company’s holdings on the death of his wife Margery. This appears to have happened in 1615.[4]

Little reference is made to the Bucklersbury properties in the Company Court Orders. The first reference to any property at Bucklersbury came in 1602, when the Company appointed unnamed nominees to ‘confer with Mr. Barrington, draper about the purchase of a house in Bucklesbury where Mr. Hodges dwells’.[5] The only other entry relating to the tenement came in a 1618 record regarding a survey, commissioned by the Company, of the lights at the house of William Walton of Bucklersbury.[6] The Company charged the surveyors with uncovering what, if any, impact the lights had on the property leased to Mrs. Warde at Walbrook.[7] The Company retained Rogers’ property at Bucklersbury until 1866, when it was sold with the neighbouring Company properties at Walbrook.[8] It is mosy likely that Pilsworth properties were also part of this sale.

Individual associated with this property

[8] A. Buchanan, ‘The Sources of the Wealth of The Clothworkers’ Company’, unpublished paper.