Edward Pilsworth became Free of the Company by servitude to Alan Rathby in 1564.[6] Edward had five apprentices between 1581 and 1606: John Pilsworth made Free  in 1581; Alan Rafeby, Free in 1589; Humphrey Clerke, Free in 1590; John Gawin, Free in 1604; and John Oliver, Free in 1606.[7] His wife, Margery, can also be traced as a Master to two apprentices – Roland Tyley, Free in 1610 and Adam Benbowe, Free  in 1612.[8] Given their Freedom dates, it seems likely that Tyley and Benbowe began their apprenticeships under Edward, but passed to Margery’s tutelage on her husband’s death. Pilsworth played an active role in the Company, serving as Master in 1601, during which he presided over a survey of property in Silver Street, which the Company hoped to buy from the financial bequest of Barbara Burnell.[9] 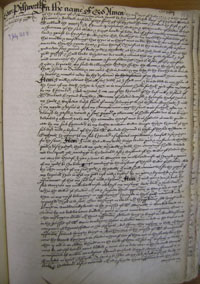 In his will, Pilsworth distributed large amounts of property and goods amongst his family, friends and numerous City institutions.[10] No references can be traced to determine how Edward gained his fortune, but it is possible that like other Company members, he may have become involved in mercantile activity in London and abroad. At the time of his death, he had built up significant property holdings. His wife was the initial recipient of these properties, with Edward granting them to her for the term of her natural life. These properties included the family home in Candlewick Street, which had been recently rebuilt; a messuage or tenement in Bucklersbury in the parish of St. Mary Woolchurch; and four other messuages and tenements in Bartholomew Lane, all of which had also been rebuilt and had tenants in place.[11]

Edward directed Margery to make an annual payment of sixteen pounds to The Clothworkers’ Company for the rents she gathered.[12] In turn, the Company was to pay £12 14s to the churchwardens of the Church of Shitlington in Bedfordshire. This money was to be distributed between the parson, who was to preach four sermons a year; church reparations; and the poor of the parish, who were to receive ten pounds of the money. If the churchwardens at Shitlington failed to fulfil these conditions, Pilsworth directed that the total amount should instead by given to The Clothworkers’ Company to distribute to poor members .[13]

On Margery’s death, Pilsworth stipulated that the four tenements and lands in Bartholomew Lane should pass to The Clothworkers’ Company.[14] The Company were directed to continue the payments to the parish of Shitlington from the rental income. Pilsworth also requested that the Company establish and maintain an exhibition to the value of five pounds annually in his name at Magdalen College, Oxford.  A scholar of either his kin or name was to receive preference over any other.[15] His remaining properties in Candlewick Street and Bucklersbury were granted to his nephew, Robert Pilsworth, and his heirs. If Robert died without issue, the properties were to be granted to his brother William.[16]

Pilsworth also granted ten pounds to The Clothworkers’ Company for a dinner for the Livery and directed the Company to select forty poor men to receive good gowns to wear at his funeral.[17] He made further bequests to the Governors of St. Bartholomew’s Hospital in West Smithfield for the relief of the poor, and to the sons of his sister Dorothy Avery, who each received ten pounds.[18] His sister, Jane Dewesbury was granted forty shillings to make her a ring, while his cousin Mrs. Lacy, the wife of John Lacy, Clothworker, received the same. He appointed his wife, Margery, and his nephew, Robert, as executors.[19]