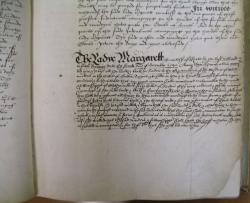 By a 1538 indenture, Margaret, Countess of Kent transferred ownership of four tenements and her own house at Queenhithe, all of which she held in fee, to The Clothworkers’ Company.[1] The Countess reiterated her intentions in her 1540 will.[2] In return for the property, the Company agreed to pay an annual stipend of seven pound to the Countess for the remainder of her life.[3] The remaining rental money from these Queenhithe properties and other lands at Fenchurch Street were to be used by the Company to support seven poor almswomen at Whitefriars almshouse.[4]

The Company retained control of the properties for just ten years. In that time the only reference to them comes in a dispute in 1546 between the Company and a Mr. Butts. Butts petitioned the Court for a lease of the Countess’ house at Queenhithe, but was hesitant to pay the thirty pounds requested by the Company as a fine.[5] The properties seem to have been sold in 1549 for £109 10s.[6] The most likely purchaser was John Machell, the then Company Master, who is noted in the Court Orders as receiving a lease for twenty-eight years purchase in that year.[7]