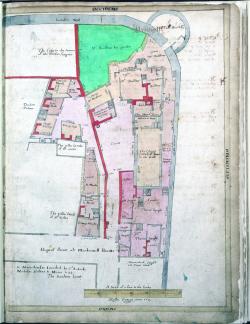 William Lambe (d.1580), Citizen and Clothworker, bequeathed property, including Lambe’s Chapel, in Monkwell Street to The Clothworkers Company in 1580. The first reference to the properties at Monkwell Street in the Company Court Orders came in 1589, with a suit by a Mr. Willet for a lease of a tenement there.[1] The Company had significant involvement in the day-to-day maintenance of the Monkwell properties. The tenants appeared to be particularly impoverished. In June 1591, they entered discussions with the tenants in the tenements regarding their rent payments.[2] On the same day, they reached an agreement with the tenants to repair all defects in the tenements and ‘continue therein until the Company shall further consider of the same and to amend and repair the vault and to have allowance for the same’.[3] By February 1592, the Company had appointed Wardens to oversee the rebuilding of tenements at Monkwell Street.[4]

Sanitary conditions were a particular concern. In March 1592, for example, the Company ordered a new survey to settle a dispute between the Company and one of their neighbours at Monkwell Street, Mr. Brandon ‘concerning the privy and the ground encroaching upon either side, and finally to make a conclusion about the same’.[5] In April 1592, Richard Kingston came to Court to pay half a year’s rent for his tenement in Monkwell Street. The Company, in turn returned 16s. 8d. to Kingston ‘for empyting the privy’.[6]  In May 1599, the Company’s tenant, Mr. Batton and their neighbour, Mr. Brandon were in dispute regarding a privy adjoining their properties.[7]

By 1601, the Company were considering expanding their holdings in Monkwell Street. In June, they entered negotiations with Mr. Brandon regarding the purchase of his tenements.[8] They purchased the tenements for £200 in the same month.[9] Following the purchase of these new tenements, the Company continued to insist on the upkeep of the properties through their annual survey. In 1605, for example, the viewers recommended that one of the Monkwell Street tenants, George Moult ‘amend the roof of his houses in...rasters and tiling’, while another Hugh Chimney was warned to ‘put in new plate in the foreside of his house there & to put in principal posts by the chimney’.[10] Disputes between the Company and tenants regarding rents and repairs were commonplace. In 1606, for example, William Butler attended the Court due to arrears of rent to the value of 46s. 8d.[11] He argued that he had been a tenant at will in the property for three years, and had already spent over £15 to repair it.[12] The Company, however, were steadfast in their demand for his rent, and Butler agreed to pay the arrears by May Day, and also repair the property before the next view day.[13] It seems, however, that Butler never made these payments. By 1609, he was back at the Court, owing £6 6s. 8d. in rent arrears for over four years rent.[14] The Company agreed to accept a small payment of 6s. 8d. a quarter to clear his debts, owing to his poverty.

In April 1613, the Monkwell properties were again embroiled in dispute. The Company appointed Wardens to meet with the Churchwardens of St. Giles without Cripplegate, due to an encroachment of the church’s tenant Jarvis Wordsworth on the Clothworkers’ tenement, which was leased to George Mott.[15] Wordsworth had built a wall adjoining Mott’s property, which infringed on it.[16] The Company and the churchwardens of St. Giles without Cripplegate resolved to end the dispute quickly.[17] A further dispute arose in 1619, when the Company took issue with work undertaken by Mr. Brett, the neighbour of Mr. Moulte, one of the Company’s tenants at Monkwell Street.[18] The Company claimed that ‘Mr. Brett hath taken down from the principals, arms which was fixed upon the said post.[19]

By the 1630s, the Company were primarily concerned with the rental income that could be accrued from the properties. In January 1637, the Company undertook a survey at Monkwell Street to determine how much rent they could potentially charge for letting the Monkwell Street properties.[20] The Company were particularly concerned to ensure that this could be done along with ‘avoiding charges which hath been and in future time will be imposed on the Company by parishioners of St Olaves Silver Street due to the poor that inhabit there’.[21]

In 1642, the Company granted a forty-one year lease of six tenements at Monkwell Street to Mr. Needler.[22] Needler undertook to pay an annual rent of £10 for the properties.[23] Moreover, he offered to extensively rebuild four of the tenements over two years at his own cost.[24] These tenements would then be condensed into three properties. He described the work he would undertake as including the rebuilding of the tenements in ‘brick and other good materials’  with each tenement being  ‘two storeys and a high above the cellars and all the outwall shall be made one brick in a handsome and decent manner, and shall be one brick and a 1/2 thick at the least; and shall make good strong and substantial floors stairs and roofs to every of the said three houses and tile them with good floors and finish and make the same habitable by the time set down for the doing thereof as aforesaid’.[25] Needler also undertook to 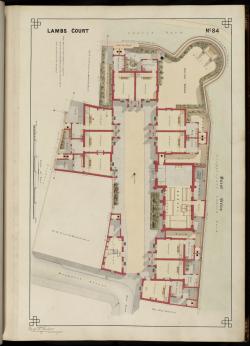 rebuild the other two tenements  in ‘brick and at other good materials in manner and form following they shall be both built with a brick in a uniform manner and shalbe erected three stories and a half high above the cellars, and all the outwalls of them shalbe two bricks and in thicknes to the second floor and then one brick and a half and in thickness to the raysin pieces and shall make good strong and substantial floors stairs and roofs to either of the said houses and to tile them with good flat English tile and finish and make the same habitable by the time prefixed for the doing thereof as aforesaid and in default’.[26]

Monkwell Street appears to have missed the ravages of the Great Fire, and leases continued to be granted during the 1670s and 1680s. The Company continued to manage the property at Lambe’s Chapel, Monkwell Street, until it was sold in c.1873[27]. By 1908, the other properties in Monkwell Street, by 1908 comprised 1-11 Wood Street Square.[28] Additional land was purchased in 1872. The original property and the new additions were sold in 1953.[29]

[27] A. Buchanan, ‘The Sources of the Wealth of The Clothworkers’ Company’, unpublished paper.

[34] CCA, Renter Warden Accounts, CL/D/5/12, The Renter Warden accounts of Robert Stevenson, 1680, f.3 and f. 10. The income figures cannot be accurately calculated due to damage to the originals.

Extract from Treswell Survey, St. James in the Wall and Monkwell Street.pdf