In his 1641 will, John Heath, Citizen and Clothworker, bequeathed £1500 to the Company with specific instructions to use £300 of this sum to build five tenements as almshouses. Each tenement was to comprise two rooms. The remaining money was to be used to purchase lands or tenements in fee simple, 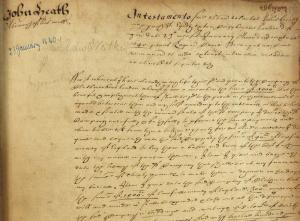 with an annual value of sixty pounds.[1] He directed the Master and Wardens of the Company to select ten poor male clothworkers to occupy these tenements or almshouses during the later years of their life. The rental income from the lands would be used by the Company to support these almsmen and to maintain the properties.[2]

On receipt of the money following Heath’s death in 1641, the Company made plans to erect the almshouses on some of their existing grounds at Islington. In June 1648, the Company began to survey the land to assess its suitability for building the almshouses.[3] By July, the Company had decided to proceed with the building and engaged a bricklayer and carpenter to begin work.[4] The work seems to have continued apace, with the Court Orders noting the first payments to the workmen in August.[5] By January 1649, the first almsmen had been selected for the new almshouses.[6] It was later agreed that the properties would be divided by drawing lots.[7] The early years of Heath’s almshouses seem to have been fairly uneventful. The only activity noted for the first six years is the changing of the resident almsmen.

The conduct of the almsmen seems to have been a continual concern for the Company. In August 1655, the Company asked three almsmen to leave the property due to unspecified ‘misdemeanours’.[8] The almsmen petitioned the Court for readmittance to the almshouses in the following October, but the outcome of their request was not recorded in the Court Orders.[9] In September 1656, the Company surveyed the almshouses. The later half of the 1650s was dominated by disputes with almsmen. In October 1657, an almsman, Mr. Heath is noted in the Court Orders as having been chastised by the Company due to his behaviour, with the stern warning ‘to carry himself better from this point on’.[10] On the same day at the Court, Mr. Hughes was asked to avoid his place due to his conduct.[11] By 1660, Mr. Bright was receiving warnings from the Company not to entertain a female companion in his room.[12] In February 1687, the Company also revoked pension payments to two almsmen ‘due to their drunkenness and keeping of bad hours in their return from London to their lodgings’.[13] Their poor behaviour was noted as having been responsible for the death by drowning of a fellow almsman.[14] The well-being of the tenants was also a major concern for the Company. The Company appointed a nurse, for example, to care for two very sick almsmen was recorded in 1683.[15]

The Company undertook their first repairs at the almshouses in January 1656, with the employment of a glazier to mend broken windows noted in the Court

Orders. In July 1659, the Company sent appointees to discuss the possibility of bringing river water directly into the almshouses.[16] By August, construction near the almshouses appears to have caused problem, with surveyors appointed to view a ‘sink in the wall of the Company’s almhouses’, which the neighbours had made.[17] The dispute with the almshouses’ neighbours seems to have continued for a number of years. In 1666, Mr. Bonfey, a Company appointee gave a report on his survey at Islington to the Court. He informed the Court that ‘upon view of the dispute it seemed that the almsmen were very annoyed about a house of office and a sink running through the Company's ground there from the house adjoining to the said almshouse wherein one Mr. Hunneywood dwells’.[18] The Company resolved to issue a notice to Mr. Hunneywood requesting the re-routing of the passage of his vault and watercourse from the Company’s ground.[19] By June 1666, the Company had reached an agreement with Hunneywood. He was to pay an annual fee of two shillings to the Court for the continued use of the vault through the almhouses’ lands at Islington.[20]

[25] A. Buchanan, ‘The Sources of the Wealth of The Clothworkers’ Company’, unpublished paper.