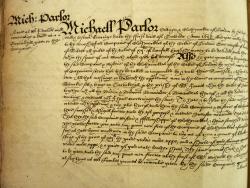 Michael Parlor (d. c.1603), Citizen and Clothworker, bequeathed a house in Garlick Hill (in the parish of St. James) to The Clothworkers Company by his will of 1 October 1603.[1] Parlor set a number of conditions with the bequest. From the rents of the tenement, he instructed the Company to provide gowns of black frieze, a strong canvas shirt and a pair of shoes annually, to six poor men free of the Company. He informed the company that these must be distributed on the feast of St. Michael the Archangel. If the Company should fail to fulfil this condition, he stated that the property would revert to Edward Parlor, his cousin’s son. [2]

Parlor died in 1603. On his death, the property transferred to The Clothworkers’ Company. At the time of his death, Richard Stackey was the tenant in the property. Stackey appears to have retained the lease on the property for at least another ten years. In May 1605, the Company’s annual survey noted that a warning had been issued to Stackey to repair the tiling and gutters on the property.[3] Stackey received a further warning to repair the property seven years later in February 1612.[4] In June 1616, Mr. Marbery, an attorney of the Court of Common Pleas at Westminster came to the Court, and made claim to the tenement at Garlick Hill, which was now leased to Mr. Thomas Starky (possibly Stackey).[5]  Marbery claimed the property for another Mr. Marbery, the parson of the parish of St James at Garlickhithe, on the basis that Parlor had only derived title to the tenement from the will of Mr. John de Rowding.[6] Marbery claimed that the will had in fact devised the property to the parson with numerous other properties. The Company ordered that a number of the Wardens would meet Mr. Swetone and Mr. Jones, Chancellors, to discuss the claims.[7]

While no formal records of the Wardens’ discussions with the Chancellors survive in the Court Orders, the Company Court Orders do suggest that the property

did indeed transfer to Mr. Marbery. By March 1618, the Company had appointed Mr. Warden Waltham and Mr. Jackson to consider what arrangements they should make with the parson of St. James at Garlickhithe regarding Parlor’s tenement.[8] It appears that in the intervening two years from Marbery’s initial suit, the rent of the property had been ceded to the parson. The Company were, however, continuing to distribute gowns, shirts and shoes to eight poor Clothworkers, as per Parlor’s bequest.[9] By the end of March 1618, the Company had decided to request compensation for the tenement from the parson.[10] By August 1618, the Company had determined not to continue to distribute Parlor’s clothing bequest, as they had received no monies in lieu of the revenue lost by the taking of the tenement by the parson of St. James, Garlickhithe.[11] No further mention of the Garlick Hill tenement or instances Parlor’s clothing bequest, are recorded in the Court Orders after this date.