Margaret Holligrave (or Hollygrave) (d.c.1595) bequeathed properties in East Smithfield (in the parish of St. Botolph Aldgate) in trust to The Clothworkers’ Company in 1595. She granted the property upon trust that the Company would pay 20s. to the poor of the each of the parish of St. Boto 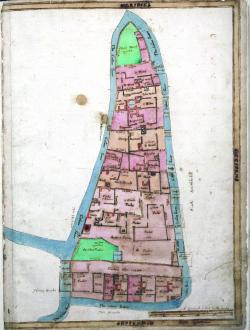 lph Aldgate and the parish of St. Mary Aldermary. She instructed the Company to pay a further 5s. a year to the prisons of Newgate, Ludgate and the two compters, and to distribute the residue of the rents to the poor of The Clothworkers’ Company.[1] The properties equated to 4-18, Lower East Smithfield.[2]

The continuing repair and upkeep of the Company properties at East Smithfield remained a concern in all leases at the turn of the seventeenth century. The aforementioned Thomas Betts, for example, returned to Court in March 1601 seeking a new lease of his tenement in East Smithfield for twenty-one years.[10] The Company offered him a lease with numerous conditions attached, including that he would pay a £10 fine, rebuild the house or shed in the backside of the property, repair the tenement, cleanse the common sewer and pay an annual rent of £2 6s. 8d.[11] They gave him a second option, which would see him continue as tenant for life, as per her earlier 1599 agreement, but under which he would have to rebuilt and repair the house in the backside and pay an annual rent of £3 6s. 8d.[12] If neither seemed like a suitable option to him, the Company offered him the opportunity to avoid the premises.[13] In April, Betts returned to Court to inform the Company that he would avoid the property.[14] The Company, in turn, undertook to pay the cost of repairing the property.[15] The Company directed repairs that even sought to improve the pavement in front of a number of properties. Robert Wood, a tenant of a tenement in East Smithfield, for example, received instructions to repair the ‘pavement in the street belonging & before his house in East Smithfield’ or the Company would evict him from the property.[16]

The Company entered into a particular dispute regarding the repair of the common sewer at East Smithfield from 1612 to 1615. In September 1612, they petitioned Sir Henry Hubbard, Knight, attorney general to King James I ‘for redresse of the annoyance of the ditche or common sewer nere the tenements belonging to the Company, which by reason of the stopping of a part there lately by William Hytchmonghe’.[17] The Company was concerned about the potential for the spread of disease from the fact that the tenants at East Smithfield had no way of cleaning the facility.[18]The dispute continued right through until 1615, when the Company met with Hitchmough to discuss his claim to the ditch.[19] Hitchmough demanded that the Company pay him 200 marks for his interest in the ditch, but the Company refused.[20] The Company finally purchased the land from Hitchmough in October 1617.[21] The Company’s interest at East Smithfield was expanded further, when in February 1619, ‘Mr. Daniel Wynche came and offered to the companie to sell to them for a reasonable price the ditch and ground soil thereof which lies on the back side of the tenement at East Smithfield’.[22] The Company sent Mr. Jackson, Mr. Beale, Mr. Munger and Mr. Carpenter to view the ditch and ground, and to discuss whether it should be bought.[23]

The Company purchased the ditch and in February 1620, Arthur Parker, who was a leaseholder of ‘divers’ tenements in East Smithfield, petitioned the Company for an addition of years on his lease.[24] He offered an additional 5 marks a year to the rent that he already paid and to build shops along the ditch purchased by the Company.[25] The Company agreed to consider his request and sent four viewers to examine the tenements.[26]  Parker’s request seems to have been agreed to, as by 1622, he was noted again in the Court Orders, making suit to the Company for a further six months to pay the remaining £20 of his £44 fine for the properties.[27]

The Company continued to fulfil the terms of Margaret Holligrave’s bequest throughout their early management of the property. Feoffees, for example, were continually appointed to ensure the fulfillment of the bequest and to act as trustees for the lands. In 1621, for example, when the Company was extending their interest at East Smithfield by purchasing the ditch, new feoffees were appointed by the Company to help in purchasing the property.[28] These included Sir Nicholas Salter, John Eldred, Christopher Gaylor, William Jennings, Richard Fox, Henry Walton, Thomas Hyde, James Chapman, Robert Reynolds, Richard Walton, Robert Freeman, Richard Beale, Joseph Jackson, Robert Parkhurst, Clement Buckley, Roger Walrond, Thomas Normecott, George Dorrington, Theophilus Brereton, Thomas Champney, James Maugher, Richard Waltham, John Carpenter and Christopher Baron.[29] For each year, the Court Orders noted the payment of the annuities from the Holligrave estate. In January 1615, for example, the half  year’s rent was distributed to poor Clothworkers, amounting to £7 8s. 4d.[30]

The properties at East Smithfield did undergo some rebuilding during the 1620s. In July 1624, Edward Rugman made suit for a lease of a tenement at East Smithfield, which he promised to rebuild during this tenure. The Company agreed to grant him a lease for a forty year term at £4 annual rent. As part of his lease, the Company directed Rugman to spend ‘£300 upon the new building of the said messuage or tenement of brick and stone, and good oak timber within the term of three years’.[31] Rugman agreed to the terms, and was asked to provide some form of security to the Company for the performance of the building clauses.[32] By September, however, Rugman was back at Court and petitioning for a longer period of time to fulfill the building clauses.[33] He offered to spend £150 over the first two years, and asked for a further seven years to complete the rest. In 1625, John Gurden took a lease of another tenement at East Smithfield for twenty-one years at £5 a year.[34] Gurden’s lease also had a rebuilding clause attached. His lease described how within three years he had to rebuild the back part of the tenement in ‘good and strong materials to the liking of the Company’.[35] Gurden also had to provide the Company with security to ensure the undertaking of the building.[36] The building clause, however, seems to have been poorly adhered to by Gurden. In 1627, William Wallins, who had taken over Gurden’s lease, petitioned the Court to spend money on the property as it was ‘in disrepair and uninhabitable’.[37]

In 1627, a further rebuilding clause was introduced into a new lease of a property to Robert Sawyer who was described as a bricklayer.[38] The Company granted him a lease for forty-nine years at £6 a year in rent.[39] Within the lease, Sawyer was directed to spend ‘the sum of £66 13s 4d over and above the bricklayer's labour to be expended on rebuilding in form prescribed by proclamation’.[40] Similarly, a tenement held by Richard and Mary Hempinstall in East Smithfield, was in such poor condition that the Company determined it needed to be demolished and rebuilt.[41] The Company offered Thomas Tye a forty year lease, on condition that he ‘begin to erect and new build two tenements from the ground of brick and stone and good oak timber in manner and form prescribed by proclamation’.[42] Tye, if he chose to accept the lease, would have to spend £150 on building at the property.[43] By 1630, it became apparent that Robert Sawyer had not in fact fulfilled the rebuilding conditions as required.[44] He had in fact divided one tenement into four tenements, and spent over the 100 marks, he was expected to. The Company sent a number of appointees to examine the redevelopment undertaken by Sawyer.[45]

In July 1631, another East Smithfield tenement was being directed under clauses in a lease to John Clifton.[46] Similar to the previous tenement rebuilds of the same period, Clifton was directed ‘to new build the tenement with brick and stone and good new oak timber in manner and form prescribed by proclamation within two years’.[47] His lease was again for forty-one years at £6 a year.[48] The rebuilding of tenements in East Smithfield continued through into the 1640s. In July 1646, for example, Roger Rogerson received a new lease for forty-one years, at an annual rent of £3 and a fine of £10. Under the terms of his lease, he was directed to fully rebuild the tenement with the instructions that ‘the house all the breadth of the front thereof next unto the street, which is 19 foote and 10 inches or thereabouts, and also in length or depth backwards 28 foot at the least. And that with brick 3 stories and a half high in a uniform manner answerable to the other brick buildings there belonging to the Company, before Michaelmas 1649’.[49] Even as late as 1664, the Company Court Orders continued to record leases that requested rebuilding of tenements at East Smithfield. In January 1664, Richard Dickenson petitioned for a property at East Smithfield and received a lease for thirty-one years, at £10 a year with a fine of £350.[50] Under the terms of his lease, Dickenson received instructions to ‘build four houses on the premises, which should [have] contain[ed] 62 foot in the front and 19 foot in the depth’.[51] In July 1666, Dickenson was back at Court and requesting an abatement of his fine, as he was ‘struggling to pay it due to the fact that his tenant's cannot pay him rents owing to an infection that is widespread throughout his tenants’.[52]

The East Smithfield properties were not affected by the Great Fire of London. As a result, they continued to be among the most recorded, and sought after, within the Company Court Orders. Many of the leases granted from the 1660s onwards were for multiple properties. In July 1669, for example, John Preston received a lease of three houses at East Smithfield for twenty-one years.[53] He undertook to pay an annual rent of £6 13s 4d and a fine of £170. In January 1675, Joseph Brooke was granted a lease of multiple properties.[54] Even as late as 1687, a new lease of two tenements at East Smithfield was granted to Mr. Myles.[55] The Company retained the East Smithfield properties through to the nineteenth century, when in 1825-6, the Company sold the property, and acquired 61-63 Moorgate Street acquired instead.[56]

[2] A. Buchanan, ‘The Sources of the Wealth of The Clothworkers’ Company’, unpublished paper.

[56] A. Buchanan, ‘The Sources of the Wealth of The Clothworkers’ Company’, unpublished paper.