Margaret Holligrave (or Hollygrave) (d.c.1595) bequeathed properties in East Smithfield (in the parish of St. Botolph Aldgate) in trust to The Clothworkers’ Company in 1595. Margaret was the wife of John Holligrave, Clothworker, who lived in the parish of Our Lady, Aldermary in London. Margaret was cessed there on six pounds in the 1582 Subsidy Rolls.[1] They had no children, but Margaret did note a sister, Elizabeth Adams, and a brother, Ralph Gosling, in her will.[2] She was buried in her home parish, where she had requested to be buried as close to her late husband as possible. 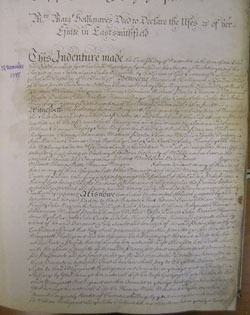 Margaret, however, in her will of 26 February 1596, showed that she had significant wealth. It is probable that John had passed ownership of his properties to Margaret, prior to his will in 1573, or that she had entered her marriage with personal wealth. She may also have become the beneficiary of bequests in her own right in the period between the death of her husband and her own. By an indenture of 12 November 1595, Margaret granted The Clothworkers’ Company all her messuages and lands in East Smithfield.[5] The property was granted upon trust that the Company would pay twenty shillings to the poor of the each of the parishes of St. Botolph Aldgate and St. Mary Aldermary. She instructed the Company to pay a further five shillings a year to the prisons of Newgate, Ludgate and the two compters, and to distribute the residue of the rents to the poor of The Clothworkers’ Company.[6]

In her will of the following year, Margaret reiterated her bequest to the Company, and additionally gave certain other directions regarding the transfer of the property and other annuities to be paid.[7] Margaret directed that in the year following her death, the rents of the properties in East Smithfield should be taken by her executor, John Cooke, Clothworker, in order to pay for the performance of her will, her funeral and other ancillary charges that might emerge.[8] After the first year, Margaret instructed that annuities of forty shillings be paid to her sister, Elizabeth Adams and brother, Ralph Gosling. Further annuities of twenty shillings were to be paid to Thomas Miller, Merchant  Tailor; William Holligrave, Clothworker; John Cooke, Clothworker; and Robert Gardiner, Draper.[9]

The remaining payments were to be the same as those stated in her earlier indenture with The Clothworkers’ Company. She stated that all annuity payments were to be void upon the deaths of the individuals concerned, with the money reverting to The Clothworkers’ Company for distribution at Christmas and Midsummer to the poor of the Company.[10]  The Company continued to record the distribution of these rents at both dates in their Court Orders in the years following her death.