Dame Anne Packington (d. 1560) bequeathed property in Islington to The Clothworkers’ Company. She was the daughter of Henry Dacres, Citizen and Merchant Taylor, and his wife Elizabeth. Her father was an Alderman of London for the ward of Farrington Without from 1526 to 1528. In 1528, he was appointed Sheriff of the City of London.  Anne was one of four children; a boy, Robert, and three girls. By the time of her father’s death, the family were resident in the parish of St. Dunstan in the East. 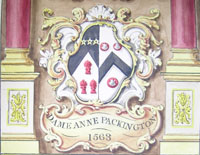 Anne was married twice. Her first marriage to Robert Fairthwaite, Citizen and Merchant Taylor, ended upon his death in 1521. Anne bore Robert two children; Elizabeth, who later married Nicholas Tychborne of Essex, and Martyn. Her second marriage to Sir John Packington gave rise to her elevation to the title of Dame. Packington, of Hampton Lovet in Worcestershire, was Recorder of Worcester and had been appointed a knight. Anne had two daughters from this marriage; Ursula who married William Scudamore and Bridget, who married John Lytellton. It appears that Anne lived much of her married life with Sir John in Worcestershire. He retained some interests in London, and records show his payment of tax in 1541 in the Parish of St. Dunstan's, with an assessment to the value of 500 marks.[1] By the time of her death c.1564, Anne was again resident in London, and requested that she be buried in the parish church of the place in which she died. She was buried in the Church of St. Botolph Aldersgate, with a monumental marble and brass tomb.[2]

Dame Anne accrued significant wealth throughout her life. From her father, Henry Dacres, Anne received her share of a legacy of £600, which he bequeathed to be distributed amongst his children.[3] His only request was that his children should be kind to his wife, Alice. If they were not, the bequest would be made void. He also gave Anne a standing cup with a gilt cover in his will, to which her then husband, John Packington, acted as witness.[4] What wealth Anne acquired from her marriage to Robert Fairthwaite is unknown, as his will does not appear to have survived.  She did, however, acquire significant property and money from her second husband.[5] In his will, Sir John Packington bequeathed Anne the lease of the parsonage of Chaddesley in Worcestershire, which had significant lands attached. He also requested that some of his farm lands at Harbington would continue to be occupied by his nephew John Packington, who would pay Anne rent for use of the same. John also gave Anne half of his corn, malt and grains; all of his household goods; half of his horses, geldings, mares and cattle; and his great chain of gold and £200 in cash.

At the time of her death, Anne was extremely wealthy. She made two separate wills: one that dealt with her general possessions and the other set out her intentions regarding her property.[6] In her general will, Anne made over twenty monetary bequests, including 40s to poor householders in the parish of St. Dunstan’s in the West and thirty three pounds six shillings and eight pence to her grandson John Tichborne. She was very generous to her servants, with one, Roger Webb, noted as the recipient of not only a black gown, but table cloths, hangings and chairs, among other things. She also granted gold rings to the value of 20s to each of her nieces and nephews. Her will betrays something of an exceptionally strong character. She makes numerous references to gifts of loans already given, but not repaid, while she also offers Margaret Tichborne, her granddaughter, 100 marks, but only on the proviso that she takes the advice of both her and her husband in choosing a suitable husband, should she marry before Anne's death. She also makes separate bequests of her property interests in both Worcestershire and Aldersgate Street, London to a selection of her grandchildren.[7] 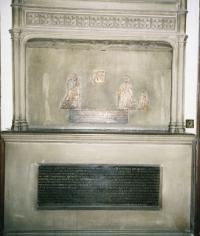 Her second will of 1559, entirely concerns her property at Islington, which she granted to a group of trustees to regulate and manage, giving all the rents to The Clothworkers’ Company, to whom she charged  a number of annual tasks. The property comprised a messuage or tenement called the Crown in Islington; fourteen acres and one rood of land next to it called the Prebend field and three roods of lands known as Great Coleman’s field. She appointed George Dakers, John Byrche, John Rolle, John Payne, Francis Payne, Robert Shakerley, Rowland Shakerley, William Forrest, John Eve, Thomas Calowe, William Iremonger, Robert Marten, John King, Roger Webbe, William Watson, Edward Wright, William Walker, Richard Marten, John King and John Iremonger, as the trustees. At the time of her will, the lands at Islington garnered an annual income of £16 16s 9d. Under the terms of the grant, she required The Clothworkers’ Company to pay £3 13s 4d to the poor of the parish of St. Dunstan's in the West. Furthermore, the Company undertook to pay eight pounds to the parish in which she was buried, giving three pounds towards the education of students and three pounds to the poor. Further monies were to be expended on the preaching of a sermon in her name in this church, and the remaining forty shillings was to be paid in alms. Anne gave any leftover money from the rents to the Company. [8]

[2] The Company are noted undertaking repairs to the tomb on a number of occasions (Monumental Brass Society, Bulletin, 97, September 2004).

Will of Dame Anne Packington.pdf