The Company received an interest in Sutton Valence from their benefactor, William Lambe. By a will, dated 6 April 1580, Lambe granted the Company a messuage and land in Abbey Warley, Essex and a tile kiln, house and land in Upminster, Essex.[1] Under the terms of the grant, the Company undertook to use the profits from the rental income of these lands to maintain the people in Lambe’s almshouses at Sutton Valence and to make an annual visitation to the free school, which he had also established in Sutton Valence.[2] Lambe was born in 1495, the son of a yeoman from Sutton Valence in Kent.[3] The first 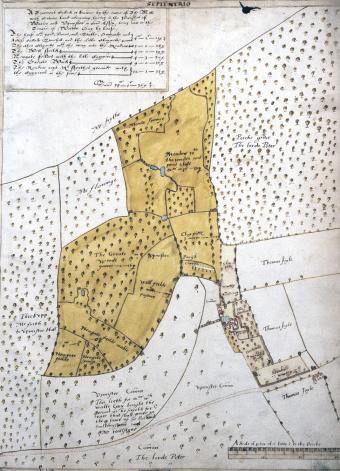 mention of Lambe’s bequest relating to Sutton Valence came in the Court Orders in March 1576, noting how the draft of the device was read ‘by mr Lambe to this Companie wherein Mr Lambe shoulde give to this Companie due annuitie or yerely rente of iiij li. to heare the chardges of the Master & one or twoo of the wardeins once euery yere yerely after his decease to go to Sutton Valance in kente to viewe and ouersee a ffree grammer schole there by hym lately erected by the quenes lettres or patents whereof after his decease he hathe the Master & wardeins of this companie Gouernors & Supervisors forever’.[4]

In 1582, the Company undertook repairs at the Sutton Valence property. Their first repairs sought to improve the ‘pailing of the backside of the school and almshouses’.[5] Throughout the 1580s and 1590s, the Company continued to monitor the school and made all necessary repairs. In 1590, the Court appointed viewers ‘to take order for the repairing and amendeing of the school and schoolhouse there, to take some order for the rents and arrears of the same due, to take a learned man to examine the scholars’.[6] In 1591, viewers returned to Sutton Valence, where they began to make preparations for the building of a new schoolhouse, which they directed should not cost above £100.[7] In 1607, the Company had turned their attention to repairs at the school again. The tiling of the school and almshouses became their primary concern.[8]

While the Company became involved in repairs of the property, they were also involved in the governance of the school. The Company Court Orders contain numerous references to the appointment of schoolmasters and ushers for Sutton Valence School. From 1591, the Company became embroiled in a long running dispute with one of their employees at Sutton Valence, Robert Sharpe. Sharpe had been appointed as schoolmaster at the school, but had frequent complaints levied against him. In July 1591, the Court Orders included reference to ‘twelve parsons [making] complaint against Robert Sharpe, the schoolmaster at Sutton Valence for his absence at school due to his frequenting of taverns’.[9] Sharpe, in turn, ‘returned to Court with certificates from gentleman and neighbours attesting to his good behaviour’.[10] The Company, in response, sent commissioners to investigate his behaviour.[11] In 1602, the Company was reporting that Sharpe was again causing problems. By 1602, numerous reports were reaching them about his absence from school and that, as a result, the school had few scholars present within it.[12]

Such was the level of concern relating to Sutton Valence that in July 1607, the Company sent ‘orders for the better government in the free school at Sutton Valence in Kent, to be copied out fair and presented to the Lord Archbishop, and the letters patents of the said foundation shalbe take out of the counting house carried hither readie to be showed to his grace, if the said letters patent were by him required to be seen’.[13] Other teachers were also causing concern at the school. The Company noted Richard Goodgroome in the Court Orders in January 1608, highlighting that he was ‘lately suspended from teaching in Sutton Valence, in respect of his travail 50s.’, and that ‘his services are no longer required and he is to be replaced by another teacher’.[14] By 1608, the Company was beginning to take firmer action against Sharpe. In October, they sent a letter to Mr. Sandford, vicar of Sutton ‘for setting down of their testimony against Mr. Sharpe, the schoolmaster at Sutton Valence’.[15]

In January 1609, the Company agreed not to pay any more wages to Sharpe ‘in respect of his defects’.[16] In March, the Company appointed Mr. Gayllor, Mr. Morrall and Mr. Foxe to ensure ‘the removing of the schoolmaster of the free grammar school at Sutton Valence in Kent, and placing another man in his place’. [17] By 1610, the Sharpe debacle ended with the Company and Sharpe in Court. The matter was heard by Sir Christopher Parkins who ‘set down in writing with his own hand, an agreement between the Company of Clothworkers Governors of the school of Sutton Valence and Mr. Sharpe consent of both parties’.[18] Parkins allowed Sharpe £35 for arrears of wages, £5 in respect of charges, £5 at Michaelmas, and £5 at Christmas.[19]

Once the Company’s dispute with Sharpe had been settled, they turned their attention back to the maintenance and repair of the school and the adjoining almshouses at Sutton Valence. In February 1611, the Company contracted to rebuild the schoolmaster’s house at Sutton Valence.[20]  The Court Orders recorded frequent references thereafter to the rebuilding of the schoolmasters’ house. The Company noted payments of £5 to Edward Figges and £4 to Sampson Boges, bricklayers for the work on ‘the amendinge & repayringe of the decayes of the school house at Sutton Valence aforesaide & for all kyndes of stuffe & workemanshippe belonginge to the same, in substance & sufficient manner to be perfourmed and donne’.[21] In July 1618, the Company undertook a viewing of both the school and almshouse at Sutton Valence, noting the defects of the reparations that had already been completed.  Mr. Hyde, Master, Mr. Gaylor, Mr. Beale, Mr. Champney and Mr. Jackson directed that the properties should be ‘repaired and sufficiently amended’, and appointed overseers to ensure the work was completed. [22]

While they continued to direct the day-to-day running of the almshouse, the Company also managed the school. In 1623, ‘Edward Pensax wrote to the Company to say that the school and schoolmasters house were both in need of repair and that the shelves and dresser boards and other things in the kitchen and other rooms are taken away by his predecessor’.[28] The Company agreed to write to him to let them know that there will be ‘care taken by the governors for the speedy repair of the defects of reparations both of the school house and of the schoolmaster of the house’ also.[29] In 1640, the Company requested a letter from the parishioners of Sutton to examine ‘what is the cause of the decay the said school and paucity of scholars there’.[30] They also hoped to bring about the removal of Mr. Pensax from his position to improve the buildings at Sutton Valence.[31] The problems relating to schoolmasters continued throughout the Company’s governance of the school. In 1646, Pensax’s replacement, Thomas Carter, came to Court to ‘resign his place, as the parents of the scholars there refused to have their children taught latin’.[32] The Company continued to play an active role in the school, the appointment of schoolmasters and ushers, the repairs of the building and later, as a board of governors for the school right through until the twentieth century. The Company transferred most of the land they had gained to the school in 1968, before selling the remaining farm, Warmlake farm in 1981.[33]

[33] A. Buchanan, ‘The Sources of the Wealth of The Clothworkers’ Company’, unpublished paper.