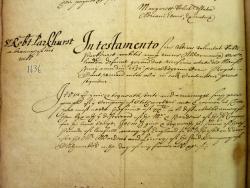 Sir Robert Parkhurst (d.1638), Knight, Alderman and Clothworker, bequeathed an interest in lands in Guildford, Surrey to The Clothworkers’ Company in 1648.[1] The only reference to the property in the Company Court Orders refers to the appointment of feoffees in 1668 for the estate trust.[2] A total of eight feoffees were appointed. These were Mr. Chaplin, Francis Dorrington, Michael Davison, Richard Beckford, John Lane, William Burton and James Young.[3] Many of these men had been noted previously in the company court orders as members of the Court. The Company sold the lands at Guildford at an unknown date.[4] The Company accounts include reference to the Guildford property in 1660, with an income of forty pounds and expenditure of five pounds record for the property.[5]

[4] A. Buchanan, ‘The Sources of the Wealth of The Clothworkers’ Company’, unpublished paper