In his 1599 will, Peter Blundell (d.1601) bequeathed £150 to The Clothworkers’ Company to purchase property to the annual value of 40s.[1] The Company purchased a house in Friday Street with the money.[2] In January 1605, the Company Court Orders record a suit for a lease of the property at Friday Street by John Harrison, Clothworker.[3] In September 1606, the Company undertook a survey of the property, following which they recommended that Harrison receive a grant of the property for twenty-one years at an annual rent of £6 13s.[4] On the 6 November 1606, the Company offered Harrison a lease in reversion, which would begin at the expiration of the old lease to William Dawes.[5] Dawes seems to have been resident in the house prior to the Company’s purchase of the property. Under the terms of the lease he had to spend £66 13s. 4d. on repairs to the property and give two good bucks of the season to the Company at the election of the Master and Wardens.[6] The lease would be for twenty-one years at £8 a year.[7]

By June 1607, Harrison had been offered a lease on the property for thirty-one years at an annual rent of 13s. 4d.[8] This lease set down that he would have to spend £60 on building and repair work at the property; with the lease to begin at the expiration of the old lease.[9] A further clause was added that he must not let or set the same without the Company's consent.[10] In October 1608, Harrison petitioned the Court again regarding his lease in reversion at Friday Street.[11] He was particularly concerned regarding the monies that he had expended on completing repairs at the property and was seeking an addition of years to his lease as compensation.[12] The Company agreed to increase his lease to a term of forty-one years.[13]

In July 1626, Anne Harrison, John’s wife, petitioned the Company to have the lease granted to her husband, who was by this time decease 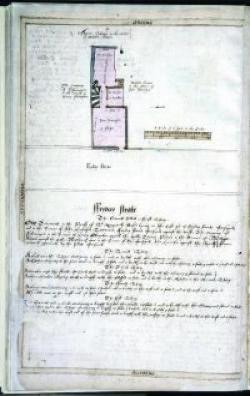 d, passed to her.[14] The Company granted her request in October 1626, giving her a lease for forty-one years at an annual rent of £6 13s. 4d.[15] By December 1633, Anne Harrison had married John Inger. Inger sought permission from the Court in this month to assign the lease of the Friday Street property to William Osborne and Thomas Watts, both Merchant Tailors.[16] The Company granted the request on condition that Inger ‘give the Court at the next election a good fat buck of the season’.[17] In April 1644, John Watts received a new lease of the property with the conditions attached that he receive it only ‘on surrender of [the] old lease; for the remaining 11 years of previous lease, at accustomed rent, but to add any more yeare thereunto this Company holds in contrary to the rules of this Court’.[18] In February 1650, William Osborne, who had been the co-grantee of the property at Friday Street with Thomas Watts, petitioned the Court for a new lease.[19] The Company promptly undertook a survey of the property.[20] By April, the Company had granted Osborne a new lease for twenty-six years, at an annual rent of £6 13s. 4d.[21] Osborne undertook to pay a fine of £40 and surrender his old lease.[22] By July 1652, Osborne was already petitioning the Court to be allowed to assign his lease.[23]

The property was destroyed during the Great Fire of London. In its aftermath, George Pochin took a lease of the land at Friday Street from the Company. In December 1668, George Pochin, now tenant at Friday Street, returned to Court seeking ‘a longer time in order to his charge of building a new house upon the premises’.[24] By 1669, he was already petitioning the Court to be allowed to assign his lease.[25] The Company undertook a survey before any decision was made to grant the request.[26] By April 1670, a new suit was being made for a lease of the property at Friday Street by Thomas Dions. The Company agreed to grant him the lease if he would ‘secure the lights [presumably at Friday Street] to the Company, as now they are altered since the fire, which he promised to do for 99 years.[27] In May, the Company received a report by the master ‘concerning the lights in the house of Dions in Friday Street’, which was read and approved.[28] No further references are made to the property in the Court Orders in the period until 1688. The Company retained the property at 36, Friday Street until the mid-twentieth century, when it was sold around 1956.[29]

[29] A. Buchanan, ‘The Sources of the Wealth of The Clothworkers’ Company’, unpublished paper.

[33] CCA, Renter Warden Accounts, CL/D/5/12, The Renter Warden accounts of Robert Stevenson, 1680, f.4 and f. 11. The full amount of income cannot be determined due to damage to the original.