On the founding of The Clothworkers’ Company in 1528, the Company inhabited the former Shearmen’s Company Hall on Mincing Lane in the City of London. The original Shearmen’s Hall was replaced by a new Hall in 1548. The Company took the decision to replace the original Hall at a Court meeting on the 18 April 1548. The Court Orders record the agreement noting

‘it was agreed that the halle shalbe pulled downe Immedyatly And that the Master and Wardeyns shall haue Aucthoritie to make begyne for a newe fframe & for all other charges belongyng to the same’.[1] 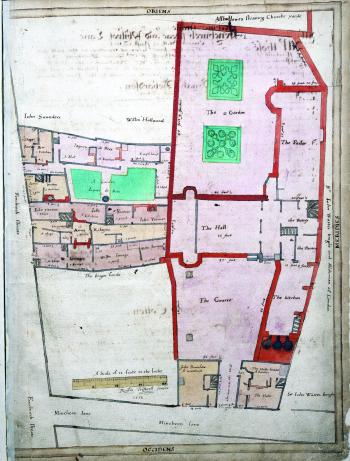 By July, workmen, including Henry Davison, the Company bricklayer, had been engaged to undertake the project.[2] The Court had direct involvement in the design of the new Hall, with the Wardens of the Company overseeing the final wainscoting of the Hall’s interior.[3] The rebuild took almost a year. The Company repaired the parlour of the Hall in 1594. A survey undertaken by the Company in 1583 exposed serious error in the parlour’s design, with the surveyors being asked to examine how ‘the parlour [shrunk] in the upper part’.[4] By 1595, the repairs were complete, and the Company appointed painters to repaint the Hall.[5] In 1612, Treswell recorded the Hall in his survey of the Company’s property as being three storeys in height with a significant vault underneath.[6]

By the 1630s, however, the Company began to think of redesigning the Hall once again. In January 1632, several company appointees, including Mr Burnell, Mr. Hodges and Mr. Carpenter, began to consider lengthening and widening the Hall.[7] The surveyors reported that the Hall should not be altered as it was ‘at present of good and reasonable proportion’ in length and breadth.[8] By the following year, the Court had decided to proceed with enlarging and repairing the existing Hall.[9] The report of workmen at the Hall, however, exposed significant problems with the existing building. They informed the Court that ‘the walls [were] defective and cracked, the windows, unfashionable, and the whole frame uncomely without ornament’.[10] It seems that the Company took the advice of the workmen, as by August 1632, work had begun on rebuilding the Hall. The Company appointed viewers in the same month to determine ‘whether to pave the Hall with stone or floor the same with Boards’ and to suggest whether the garden should be raised on the north side of the Hall.[11]

Despite the rebuild of the Hall, some faults continued to persist. In November 1633, Mr. Davies, the leaseholder for the cellars underneath the Hall, complained that the cellars had not been dug deep enough.[12] In 1640, the then leaseholder Captain Royden undertook the repairs to the cellar, under a condition of his lease. Royden, though, entered into a dispute with the Company regarding the payment for these repairs, refusing to pay the £15 due to the mason for his work. The Company requested his avoidance from the property.[13] In 1650, the Company were again undertaking repairs at the Hall. They appointed viewers to examine the Hall and determine what repairs were necessary.[14] As the Company struggled with the weight of Civil War dues on their accounts, they requested that the Quarter Warden, Edward Chard, should use some of the £300 due from the sale of the corn to repair the hall.[15] Repairs continued through the 1650s, as the vaults underneath the Hall, gave rise to continual concern.[16]

The Third Hall was destroyed by the Great Fire of London in 1666. The Company rebuilt the Hall quite quickly with references to the fin 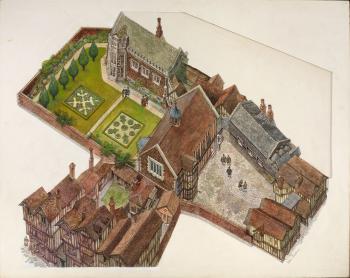 al roofing of the Hall by August 1667.[17] It appears to have been built on the footprint of the previous Hall, and may have used the fire-damaged walls of the previous Hall.[18] In the aftermath of the Fire, the Hall was much in demand. Several references to the rental of the Hall to Lord Mayors and Sheriffs of the City of London are recorded in the 1670s. The Company generally consented to these year long rental agreements, and charged rents ranging from £100 to £200 for the privilege. An agreement with Mr. Lisney for the use of the Hall for the sherifalty in 1673, for example, stated that the Company would not rent the Hall for less than £200 and that would retain the right of access for their meetings.[19] The Fourth Hall remained in use until 1855, when it was deemed to be structurally unsafe.[20] The new, fifth Hall remained in place until it was destroyed in May 1941 during World War II.[21] The current Hall replaced it, and was officially opened in 1958.[22]