John Lute (d.1586), Citizen and Clothworker, bequeathed property in Cateaton Street (in the parish of St. Lawrence Jewry), to The Clothworkers’ Company by his will in May 1585. 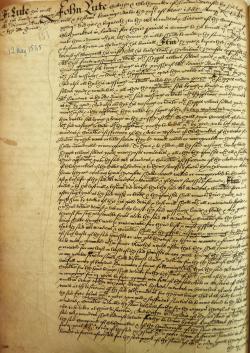 [1] The Cateaton Street property, along with others in Cornhill and Fenchurch Street, was to pass first to his wife Margaret for the term of her natural life, following which he stipulated they should pass to The Clothworkers’ Company. Margaret, is noted in the Court Orders, as continuing to live in their home in Cornhill throughout the 1580s and in the early 1590s.[2]

Lute bequeathed the properties to The Clothworkers’ Company with a series of conditions relating to the incomes from the properties and their charitable uses.[3] Under his direction, the Company maintained a loan scheme to five young clothworkers; paid money to a clergyman to preach a sermon in his name in the church of St. Michael in Cornhill on the feast of St. Luke the evangelist every year and set up annual gifts of clothing in his name to be given to twelve poor men and twelve poor women [4] He also charged the Company to select twelve poor men and women to receive gifts of clothing on the day of the sermon each year.[5] To ensure the fulfilment of these grants, Lute made provision in his will that should The Clothworkers’ Company fail to undertake his directions, the property would pass to the Drapers’ Company.[6]

Little reference is made to the Cateaton Street property within the Court Orders. The only entry comes in December 1667, when in the aftermath of the Great Fire, Samuell Crispe, the Company’s tenant sought a new lease.[7] The Court Orders note that he was tenant by a lease, in which there was still forty-one years to run.[8] He received a new lease, however, for forty-five years at ten pounds per annum, under which he still had to fufil the conditions attached to his previous lease.[9] The Company retained the property until its sale in 1839.[10]

Individual associated with this property

[10] A. Buchanan, ‘The Sources of the Wealth of The Clothworkers’ Company’, unpublished paper.