The Reverend Robert Peele (d.c.1539), Citizen and Grocer, Free of the City of London, bequeathed lands and tenements in Fleet Lane (in the parish of St. Sepulchre) to The Clothworkers’ Company.  Peele was vicar of the parish church of Chillham, Kent at the time of his decease. Little is known of his early life, and his will makes no reference to family members, with much of his benevolence directed towards The Clothworkers’ Company and his home parish.[1] 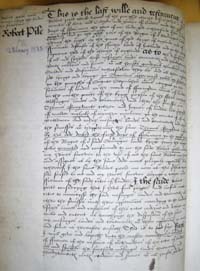 Peele had originally received the property in Fleet Lane in a deed from Thomas Bonysannte, Citizen and Joiner.[2] In his will, he bequeathed the property entirely to The Clothworkers’ Company, making several stipulations for the use of the rental income.[3] Peele gave instructions for a yearly obit to be sung or prayed in the church at Chillham, for which the Company were directed to pay the priest an annual stipend of nine pounds six shillings eight pence.[4] From this money, the priest, in turn had to ensure that any necessary repairs were undertaken to his house. Peele also directed the Company to pay an annuity of thirteen shillings four pence to The Grocers’ Company, of which he was a member  His will also made provision for the transfer of his property bequest to The Grocers’ Company, if the Clothworkers failed to fulfil the terms of his bequest.[5]