Thomas Ormeston (d. c.1557), Citizen and Clothworker, bequeathed property in Lothbury (in the parish of St. Margaret) to The Clothworkers’ Company in his will dated 24 February 1556.[1] He served as Renter Warden from 1545 to 1547, and as Master in 1557.[2] In his will, Ormeston refers to his town of birth as ‘Querne’, most likely Quorne in Leicestershire.[3] He was married to Eleanor, and had two daughters, to whom he bequeathed ten pounds on their wedding days. He also had three brothers and two sisters, to whom he granted £100 to be divided between them.[4]

Ormeston lived in several parts of London during the period from 1540 to 1557. The Tudor subsidy role for 1541 included a ‘Thomas Armeston’ with an assessment of twenty pounds in the parish of St. Olave (Southwark) and thirty pounds in the parish of St. Christopher at the Stocks.[5] Later, Ormeston lived primarily in the parish of St. Bartholomew the Little in the City, where he may have had a workshop. Viewers recorded him there in 1547, when he was in dispute with The Merchant Taylors' Company concerning a fence and garden between their respective properties.[6] During his term as Master in 1557, Ormeston received a lease of the Great House in Billiter Lane from the Company, for which he paid a fine of £150 and undertook to make any necessary repairs.[7] Ormeston left instructions that he should be buried in the churchyard of the parish in which he happened to die.

Ormeston appears to have been an active member of the Company, with five identifiable apprentices naming Ormeston as their Master upon their Freedoms. These included Henry Marten, made Free in 1547; Robert Wood, made Free in 1553; and William Langley, made Free in 1554 .[8] Ormeston identified his nephew, Robert, as one of his apprentices in his will, but it appears that he had not finished his term of apprenticeship when his uncle died. He was in fact made Free in 1561, under Walter Jobson, as Master.[9] A further apprentice, Oliver Cowper, was also mentioned in Ormeston’s will, but does not appear in the Company's Freedom registers. However, an Oliver Cowper can be distinguished as a Master in his own right by the 1560s.[10]

In his will, Ormeston bequeathed all his lands in the parish of St. Bartholomew the Little to his wife, Eleanor, for the term of her natural life. Under the bequest, Eleanor was charged 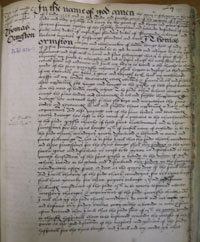 with keeping and maintaining the property in the good repair, and making several annual payments from the rental income. These included three pounds quit rent to be paid to the churchwardens of the abovementioned parish, which in turn was to be distributed to the poorest householders residing therein. A further three pounds was directed to Christ’s Hospital for poor relief.

On Eleanor’s death, the lands were to pass to Thomas’ nephew, Robert Ormeston and his heirs. Should Robert die without issue, the properties would then pass to The Clothworkers’ Company. It was not until 1592 that the properties came to the Company following the death of Robert’s son. Thomas Ormeston instructed the Clothworkers to continue to pay the various annuities to the churchwardens of St. Bartholomew the Little and Christ’s Hospital. He also gave orders that the Company should pay six pounds in total to three newly-built hospitals within the City. The remainder of the monies derived from the lands should then be used to keep the properties in good repair and pay any costs accrued by the Company in dealing with the estates.

Ormeston also bequeathed a further £100 to The Clothworkers’ Company, with instructions to give ten pounds to ten honest householders, who would have need of it for two years. Each householder would have to appoint guarantors for the money. After two years, this money was to be returned to the Company for redistribution. The Company's Court Orders are littered with numerous references to this practice, with twenty-five recipients recorded between 1564 and 1571. Ormeston also granted the Company a further six pounds for a dinner on the day of his funeral. The remainder of his will concerned small grants of money and clothing to numerous family members, prisons, and the clothiers of Suffolk.