Samuel Lese (d.c.1634), Citizen and Clothworker, bequeathed property to The Clothworkers’ Company in Holborn Bridge (in the parish of St. Andrew, Holborn) and Mutton Lane (in the parish of St. John Zachary), London. Lese appears to have been a bachelor, and makes no reference to any family members in his surviving will.[1] He lived in a house known by the sign of the Rainbow, near Holborn Bridge, London. In his will he requested that he be buried in a location chosen by his executors, and it seems most likely that he was buried in the parish in which he lived.

Lese does not appear to have had a career as a clothworker. No record of Lese's Freedom of The Clothworkers' Company survives in the Company's Freedom registers; however, correspondence on file suggests that he was made Free by Redemption on 23 July 1611, paying the Company a fee of twenty pence. Only one apprentice can be identified with Lese as Master; on 21 April 1630, a Walter Lee was registered as Lese’s apprentice, but there is no record of him ever being made Free.[2] From Lese’s will, it is apparent that he had accrued significant wealth during his life. Given his membership of The Clothworkers’ Company, it might suggest he was involved in trading cloth, although no evidence has been found of this. [3] 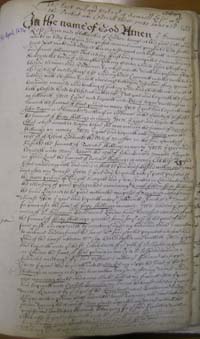 In his will, dated 26 April 1634, Lese outlined his intentions for his property at Holborn and Mutton Lane.[4] His servant, Isabel Harrison, was to be allowed to remain in his house at Holborn Bridge for a period of ten years following his death. The grant to Isabel included the house, garden and small plot of land. She was also to receive all of the goods and chattels in his house at Holborn and further properties in Field Lane and Lese’s shop in Shoe Lane.[5]  After the term of ten years, the Holborn Bridge property was to revert to The Clothworkers’ Company, along with the house next to it, and a tenement with a plot of land in Mutton Lane. Lese also granted all his leases of houses in London and Middlesex to the Company, with all the rents and profits that grew from them. In return, he asked the Company to spend twenty pounds on his funeral and to become executors of his will.[6]

In a codicil, dated 30 April 1634, Lese set down further conditions governing the rents from his properties at Holborn Bridge and Mutton Lane.[7]  He requested that the Company give money towards several charities. These included the establishment of a loan scheme to honest young men of the Company, upon security, for a period of time to be devised by the Master and Wardens; the distribution of profits from this money to poor, aged men and women of the Company and a sermon to be preached annually on a festival day.[8] He also bequeathed five shillings to anyone appointed as his executor for their pains taken in their fulfilment of these conditions. These charitable outlays added to those set down in his original will, in which he granted forty shillings to the prisons at Ludgate, Newgate and the two Compters, and paid forty shillings to the St. Paul’s Cathedral and the parish of St. Andrew, Holborn.[9]