John Hobby, Citizen and Haberdasher, bequeathed property in Plumstead, Woolwich and Watford to The Clothworkers’ Company. Hobby was married to Mary and had two daughters, Martha, married to James Rudge and Margaretta Maria[1]. He had one brother, Joshua Beale and a sister, Rachel Hacklet. He lived in the parish of All Hallowes the Wall in London.[2] Hobby received a nomination as Alderman for Bishopsgate Ward on 20 August 1666, but paid a fine of £720 to discharge himself from office.[3] Hobby had significant interests in overseas trade. He invested in the East India Company, and served three terms on the Company’s Committee from 1664 to 1666, 1667 to 1668 and 1689 to 1670.[4] It is from this trading activity that Hobby made his fortune. 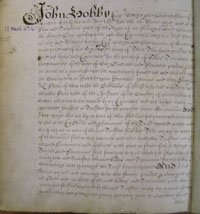 Hobby’s wealth is evident in the monetary and property bequests made in his will. He divided his estate in three, as was customary in London.[5] He gave a third of his estate to his wife, Mary; another third to his daughters and the final third, was distributed to numerous causes. Both of his daughters received vast monetary bequests. Hobby noted that Martha had received £2000 as her marriage settlement, and that this would be her share of the estate. His other daughter, Margaretta Maria, who remained unmarried was to receive £2000. [6] He also gave his house in the parish of All Hallows in the Wall in London with twenty four pounds to his sister, Rachel Hacklet.[7]

The division of the third part of his estate serves to highlight Hobby's involvement in overseas trade and his wide interests within the City of London. Hobby granted Edmund Mawforth the remainder of his adventure in Barbados, which he estimated at six thousand pounds weight of sugar. He granted his brother, Joshua, ten pounds, and he also recognised the four orphan children of his Cousin Dover, giving them each ten pounds towards clearing the mortgage of their house in Coleman Street.[8] Hobby also made bequests to several London institutions. He gave twenty-five poor members of The Porters' Company forty shillings each. He gave one hundred pounds to the Treasurer of St. Bartholomew’s Hospital for distribution to the poor of the hospital; and five pounds to the parish in which he lived.

A further property bequest was made in trust to both Christ's Hospital and The Clothworkers’ Company. Hobby instructed his executors to purchase lands to the annual value of £170 that would be settled on fourteen trustees and their heirs.[9] Seven would be from Christ’s Hospital, with the other seven Assistants of The Clothworkers’ Company. Hobby stated in his will that forty pounds from the rental incomes of these lands and tenements was to be used for numerous charitable causes.[10] These included the stipulation that both Christ's and The Clothworkers’ would take four blue coat boys annually from the Hospital and establish them in apprenticeships, with twenty pounds beingemployed towards raising the stock to set them up in these. These grants would be renewed to others from the blue coat boys, as the older apprentices attained their freedom.[11]

Hobby instructed that his trustees should also take sixty pounds annually to provide three yards of broad cloth, a shirt, a pair of stockings and a pair of shoes to thirty poor persons, twelve of whom should be Free of The Haberdashers’ Company. The other eighteen were to be selected by the Master and Wardens of The Clothworkers’ Company.[12]  Hobby directed that the remaining fifty pounds from the annual inocme was to be used towards the relief and discharge of twenty-five prisoners.[13] Such was his wealth that Hobby requested that £3000 he had invested with the East India Company remain so, and the interest accuring from this should revert to the trustees to enable them to continue to discharge the annuities and other charitable causes Hobby directed at their discretion.[14]