William Heron, Citizen and Woodmonger, bequeathed property in West Smithfield and Cow Lane (both in the parish of St. Sepulchre), to The Clothworkers’ Company upon his death in 1580. Little is known of Heron's early life, but some family connections can be traced from his will. Hewas originally from Newcastle. Heron lived in Clerkenwell, London.[1] It is possible that in his position as a member of The Woodmongers' Company, Heron may have been involved in mercantile activity, but no evidence has been found to support this. He was married to Elizabeth, and appears to have had no natural children. He bequeathed annuities, monies and goods to his stepchildren, Katherine Bassett and Joan Hall, from his wife’s first marriage, in his will. He also had a brother Thomas Heron, who lived in Newcastle.[2] 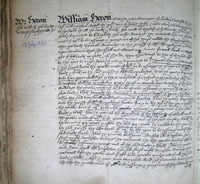 Heron's property bequest to The Clothworkers’ Company was slightly unusual, in that he instructed his executors to make a choice as to whether to convey his property to the Woodmongers or the Clothworkers. The Woodmongers were an ancient livery company that traditionally regulated the trade of carmen.[3] In 1605, they received a joint charter with The Company of Carmen, and the original Woodmongers’ Company ceased to exist entirely by 1746.[4] Heron's executors Edward Buggens, Robert Wood and Clement Rigges, who were all from Islington, decided to pass his lands entirely to The Clothworkers’ Company shortly after Herons’ death.[5]

Heron left specific instructions for the distribution of the rents from the properties at West Smithfield and Cow Lane amongst several family members, acquaintances and charities in his will.[6] From his property, called the Maidenhead, in the parish of St. Sepulchre, London, he established an annuity of £20 for his wife, Elizabeth, on condition that she make no further claim on his lands. If she did so, her annuity would cease. He also granted his brother, Thomas Heron and his heirs, £5 annually from his tenements in the parish of St. Sepulchre.[7] He instructed that both his stepdaughters, Katherine Bassett and Joan Hall, should receive an annual income of 40s from these properties. He also advised the Company to pay a further 20s annually to Katherine Bassett, and a further 20s to John Hall, who may have been the husband or son of Joan. Heron also made provision for his servant, Margaret Bell, who was to receive 40s a year during her natural life.[8]

By his will, Heron established university exhibitions to the value of £5 annually, which were to be granted to poor scholars attending University College, Oxford and Peterhouse, Cambridge.[9] The parish of St. Sepulchre were to be recipients of £4 annually for distribution to the poor of the parish. Heron also directed £4 a year for twelve years to the parish church of Clerkenwell for use in repairs to the church, and a further £4 for distribution to the poor of the parish.[10] He gave detailed instructions that following the death of his wife Elizabeth, the £20 annuity that she received during her lifetime should pass to the parish churches of St. Sepulchre’s and Clerkenwell, for use in ongoing reparations .[11] The monies directed to his wider family would be transferred to the upkeep of the highways in the Finsbury, Islington and St. Pancras areas.[12]

Heron also made numerous bequests of money and goods to a number of individuals, charities and companies. He granted £100 to the four major London prisons, for example, while the Company of Woodmongers received £6 13s 4d for recreational purchases.[13] He directed that a further £10 should be granted to his wife Elizabeth, on the understanding that £60, which was still unpaid by her parents, as part of her marriage settlement, should be paid to his executors.[14] He bequeathed the remaining goods and monies that were not accounted for in his will to the upkeep of the tenements that he granted to The Clothworkers’ Company.[15]