Roger Gardiner (d.c.1520), Citizen and Fuller, bequeathed property in Billiter Lane (in the parish of All Hallows Staining) and Fenchurch Street to The Fullers’ Company. Little is known of Gardiner's life and career beyond what is contained in his wills dated 31 October 1520. Two separate wills survive for Gardiner, in which the aforementioned properties were bequeathed separately, with different instructions.[1] 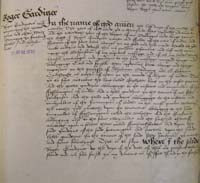 By his first will, Gardiner bequeathed his property in the Billiter Lane area to the Company.[2] The property comprised a ‘capital messuage’ and lands, tenements, houses, curtilages and gardens adjoining the said property. The monies generated from rents were granted entirely to The Fullers’ Company to ensure its continued prosperity. In his second will, also dated 31 October 1520, Gardiner gave six tenements in the parish of Allhallows Staining.[3] The properties were located in the Fenchurch Street area. He gave specific instructions to the Company to use the rental profits to pay for an annual obit in the parish church of St. Martin Outwich for Stephen Lound, and his wife, Maud. The exact connection between Gardiner and Lound is unknown.

Gardiner instructed the Wardens of the Fullers’ Company to distribute twenty three shillings and four pence annually at the obit to the parson, priest, clerk, sexton and helpers at the obit. He also directed the Company to make annual payments to the Master, Wardens, Beadle and Clerk of the Company for their attendance. Furthermore,  he stipulated that four shillings and four pence should also be given to thirteen of the most poor of the parish of St. Martin Outwich on the day of the obit. The final section of his will gave specific instructions that any residue in the profits should be used to repair the six tenements. If the Company failed to do so, Gardiner ordered that they must pay 40s as a forfeit to the parson and churchwardens of the parish church.