John Field (d.c.1527), Citizen and Shearman, bequeathed property in Greenwich to the Company of Shearmen. Little is known of his early life, but some family connections can be traced from his will.[1] He was married to Ellen, and had one daughter, Alice, and a son, Nicholas, who was a friar in the friary of St. Augustine in London. In his will, John Field noted his particular hope that he would be buried in the church of St. Bartholomew the Little in Broad Street ward, London. Field had significant landholdings in Kent, including lands and tenements, orchards, gardens and marsh of almost two acres in Greenwich and Charlton. 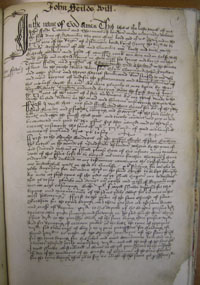 In his will, Field gave specific instructions that his feoffees and their heirs should make annual payments from the monies generated out of the lands. These included monies to be disbursed to the churchwardens of the parish church of St. Bartholomew the Little in Broad Street ward, London for the keeping of an annual obit in his memory; alms to be distributed to poor parishioners, to be overseen by the Company of Shearmen; monies to the Shearmen for attending his obit; and payments to his wife and children.

He also instructed his feoffees and their heirs to facilitate The Company of Shearmen in letting the lands and tenements he bequeathed within one month after his death. The Company would then receive all the rents that derived from the property to pay the annual charges above. He instructed the company to retain any remaining rental monies for their own use. Following the death of his wife and daughter, Field requested that the Company sell the lands and tenements and retain the sale money for their own use, continuing to make the annual payments from his estate. The Greenwich property was sold to John Lute in 1548.