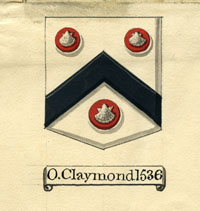 Claymond was married to Agnes/Anne, the daughter of John Saunders, a Draper. They had two daughters – Isabel and Thomasine. Isabel married John Clerke, Clothworker, while Thomasine was married twice; firstly to Richard Hawkins and secondly, to John Payne. Both of Claymond’s daughters are frequently mentioned in the Court Orders of The Clothworkers’ Company. Following Oliver’s death, Isabel and her husband John Clerke disputed the title of the Company to his properties, claiming an interest for themselves. In 1542, the Company agreed with Clerke and Isabel that they should surrender their rights and titles to the lands bequeathed. They agreed to pay an annuity of five pounds to the couple for the term of the life of the longest liver of them.[2] Thomasine is noted frequently in the records as the recipient of an annual annuity from her father's estate, and is also recorded as a widow and almswoman at Whitefriars in 1574.[3] Following Claymond’s death, his wife Anne married Cornelius Hayes, Citizen and Goldsmith. She died on 25 May 1550, and was buried in the church of All Hallows, Thames Street.

In his will and its codicils, dated 28 February 1540, Claymond gave instructions for the future of his properties. He appointed his wife, Anne, as sole

executor, and granted his lease of a property in Shoe Lane at St. Andrews in Holborn to his daughter Isabel and her husband, John Clerke. He bequeathed all his other properties, including those in Cornhill, Abchurch Lane, St. Nicholas Lane and Mark Lane, to his wife Anne for the duration of her life, after which they were to pass to The Clothworkers’ Company. The Company, in return, were expected to pay an annuity of four pounds to his daughter, Thomasine,  and to fund a Pascal light and sepulchre at Easter and four staff torches and twenty four other torches on the feast of Corpus Christi in the church of All Hallows Staining.[4]