John Bayworth (d.1623), Citizen and Clothworker, bequeathed property in Fenchurch Street to The Clothworkers’ Company. He served as Master of the Company in 1602.[1] Bayworth was born in Kent c.1546, and resided in the parish of Farnham, Surrey at the time of his death.[2] He was married to Petronella, but had no children.[3] He had one brother, Daniel Bayworth, whom he remembered in his will.[4] Bayworth played an active part in local government in Farnham. He served as a Burgess from 1606 to 1607, and was appointed as one of the town’s two Bailiffs from 1610 to 1611 and again, from 1615 to 1616.[5] John Bayworth died on 4 October 1623. He is buried in the parish church in Farnham, where he requested that his grave lie as close to his family pew as possible. He instructed that his burial site should be marked by a marble slab to be maintained by The Clothworkers’ Company under the terms of the grant of property they received in Fenchurch Street. A surviving monument in the parish church bears the inscription, ‘Here Lyeth Buried the Bodie of John Bayworth, Borne in Kent, whoe departed out of this world the 4th day of October Anno Domini 1623, To rest with his saviour Jesus Christ; What I Gave I Kept; What I Kepte I Loste’.[6] 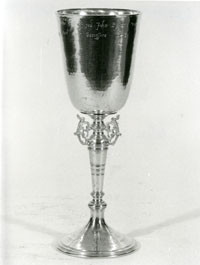 Bayworth was made Free by servitude in 1567, following an apprenticeship with Richard Medley.[7] Nine of Bayworth's own apprentices subsequently became Free of the Company. These were William Webbe in 1575; James Bones in 1576; John Meller in 1584, William Eylesley in 1585, Walter Chamberlain in 1591; Henry Cooke in 1592; John May in 1594, John Hide in 1602 and his cousin, Christopher Fevens in 1616.[8] Another cousin, Thomas Horsford, registered as Bayworth’s apprentice in 1607, but no record survives of his Freedom of the Company.[9] During his career, Bayworth became a successful clothier, enabling him to purchase significant property in both London and Farnham, Surrey.[10]

In his will, Bayworth made several bequests to The Clothworkers’ Company. He  granted the Company his messuage or 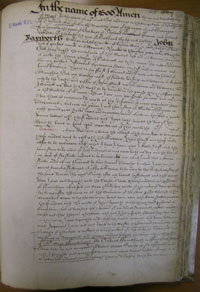 tenements in the parish of St. Mary Fenchurch and St. Gabriel Fenchurch in Fenchurch Street, which he had purchased from Walter Saunders, a gentlemen.[11] At the time of making his will, the properties were leased to John Browne, Clothworker and Thomas Shotten, Merchant Taylor, for an annual rent of ten pounds. Bayworth’s grant came with a set of annual conditions attached.[12] The Company had to undertake to pay an annual stipend of twenty shillings to Christ’s Hospital for the education of poor children.[13] They also received further instructions to pay thirteen shillings and four pence to the poor people inhabiting the almshouses in the parish of Farnham, Surrey, each year. [14]

Bayworth directed the Company to pay a further annuity of twenty shillings to the churchwardens of the parish church of St. Mary Fenchurch on the feast of All Saints. Ten shillings of the money was to be paid to the parson for the sermon, while the remaining ten shillings was to be disbursed amongst the poor of the parish[15]. Bayworth stipulated that a further forty shillings of the rents should also be given to the parson and churchwardens of Farnham on the feast of All Saints. This money was intended for payments to the parson for sermons, for distribution to the poor and for reparations to the parish church and schoolhouse.[16] Further monies were to be distributed to the schoolmaster and clerk at Farnham, the Clothworkers’ Renter Warden and the Clerk of the Company. He also directed the Company to take 20s towards dining at the Lord Mayor’s and Sheriffs' annual dinner in the Guildhall. [17] Any remaining rental income was to be given to the poor of the Company. Bayworth included the proviso that if the Company failed to pay any of these annuities within six months of their payment dates, the property granted would pass entirely to the Governors of Christ’s Hospital.[18]

Bayworth also granted The Clothworkers’ Company a silver salt, with a gilt cover, to the value of twenty pounds, which was to be paid to the Company by his wife, Petronella, as his executrix.  His other properties in Farnham, Surrey were granted to Petronella and her assigns for her lifetime on condition that she keep the same in good repair.[19] After her death, they would be inherited by Bayworth’s godsons, Thomas Horsford and Bayworth Horsford. Baysworth made several other significant bequests in his will. [20]The parish church in Farnham, for example, received a silver gilt cup, valued at ten pounds. Similarly, he granted the Bailiffs and Burgesses of the town another silver cup worth 13s 4d, which was to be engraved with some suitable dedication. He also requested that Petronella distribute two shillings and a new pair of gloves to fifty poor men from Farnham, who attended his funeral.[21]

[6] T.S. Cooper, The Church Plate of Surrey: reprinted from the ‘Collections of the Surrey Archaeological Society' (London, 1902), p. 4.